I always loved Halloween but unfortunately in Italy Halloween was not really known when I was little.

When I was 11 or 12, I decided to host my first (and last) Halloween party. My dad really supported me and helped me setup a big room with fake spider webs, creepy music and even carved out a pumpkin (whole pumpkins were quite difficult to find back then). We had nice food, candy, music, kids dressed up in costumes. It was a very cool party. Actually I think it was the best party I've ever had to this day (which is a little sad, really).

Anyway, at some point I finally brought up what would be the highlight of the party: "Let's go trick-or-treating!"

As I said, Halloween was not really known in Italy and I lived in a quite remote countryside village in which 80% of the inhabitants were elderly people.

We ring the bell the first house, the elderly couple were really nice and gave us few hard candy (the "grandma" kind), we were really happy and went along. We rang the bell to few other houses but most of the people answering the door were really confused, asking what we were doing dressed up like that (so we had to explain the concept of Halloween every time) and usually dismissed us apologizing because they didn't have any candy in the house.

Then we rang the bell of an old hunter's house. He was really unhappy to see us and instead of just sending us away, he started yelling "Go away or I'm going to get my rifle! I'm going to get it!". He probably just wanted to scare us and he succeeded. We were all shocked and ran away as fast as we could, back to my house, to split the few candies we've got.

That was the end of my first and last Halloween party. 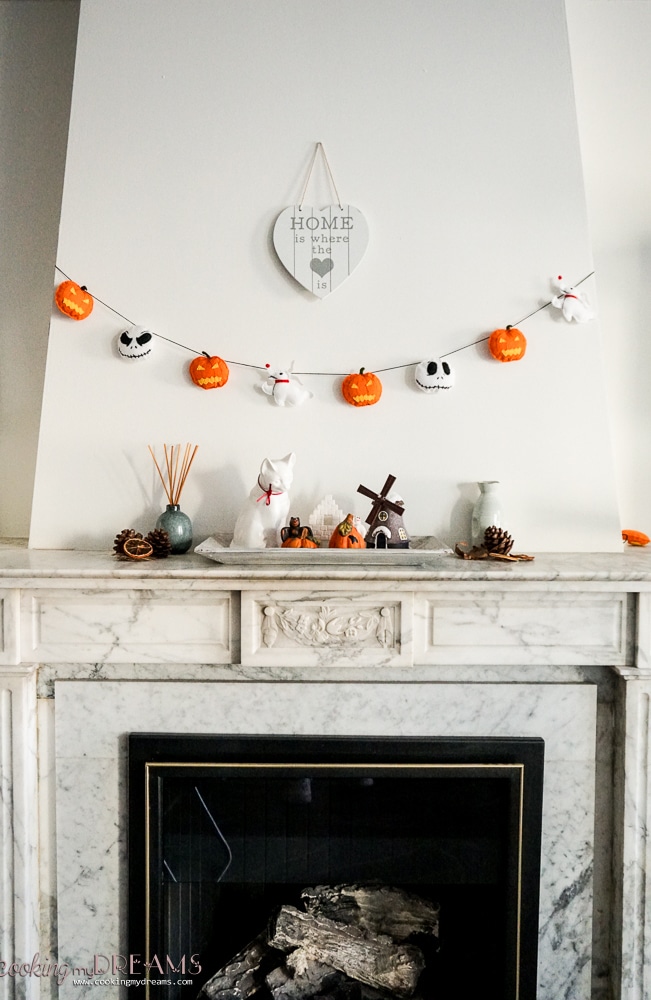 Nowadays I still don't have the chance to celebrate Halloween they way I'd like to, the way I did when I spent few heavenly months in California (the one time I enjoyed the REAL Halloween!) but I still love to put up some decorations in my house.

Last month I went to see Tim Burton's World Exhibit in Belgium and now I cannot think of anything else. So this year's Halloween decoration had to be Tim Burton's themed.

I know, I know. Nightmare before Christmas is supposed to be a Christmas movie. But I watch it every year on Halloween's day so for me it will always be a Halloween movie!

I loved making this decoration. It took me about 3 days to make, working on it a couple of hours per day. The best thing is that you can mostly work on it while sitting on a sofa, bingeing Netflix. That's my kind of perfect crafting time.

Initially I intended to add also Sally's face and the Oogie Boogie man, but I didn't like the color combination with the felt I found so I decided to scrap them at the last-minute. That's why in the material photo there are more colors than listed. 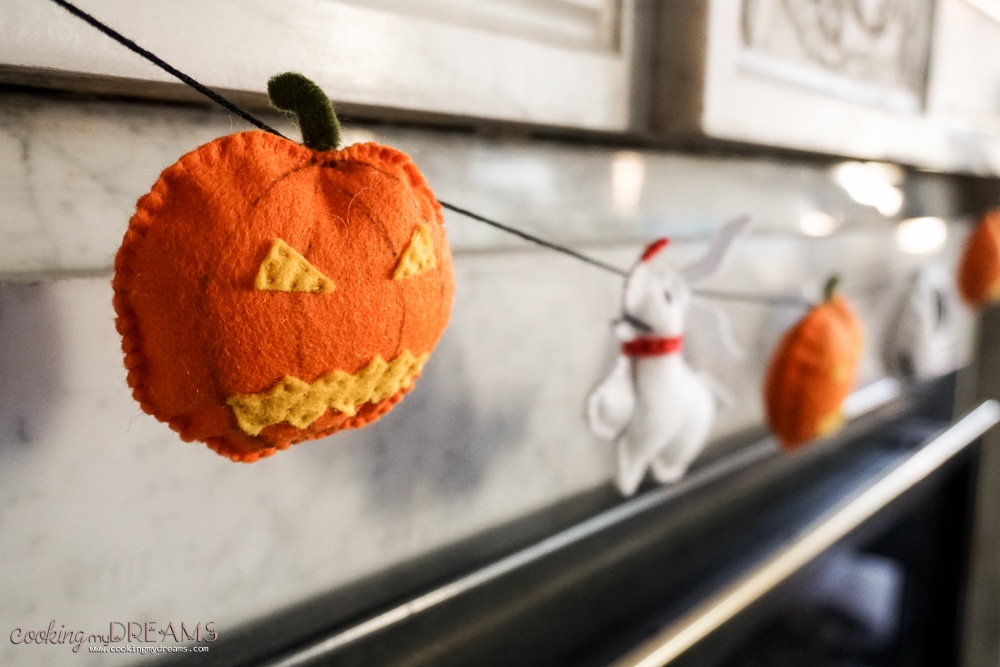 I drew the outlines on paper, which you can download below and print them out (you're welcome :D).

Jack and the Pumpkin

2. With a black felt-tip pen, draw the details on the front side.

3. Cut the eyes and other details out of the felt and sew them on the front side with a straight stitch using the same colored thread. 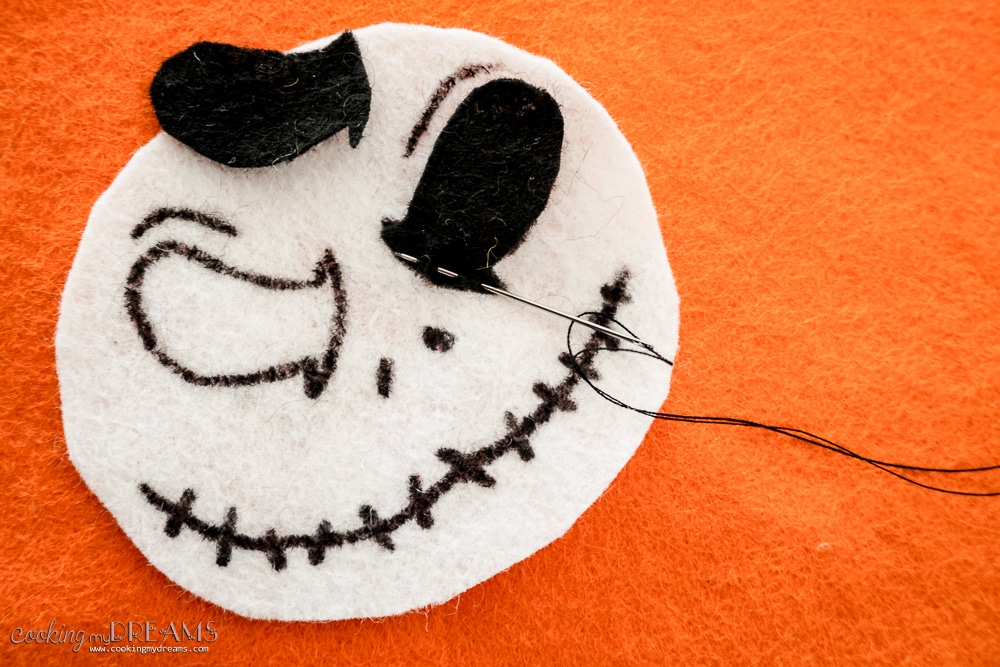 4. Sew the front and back sides together with a blanket stitch leaving about 4 cm (1 ½ inch) of opening on one side. 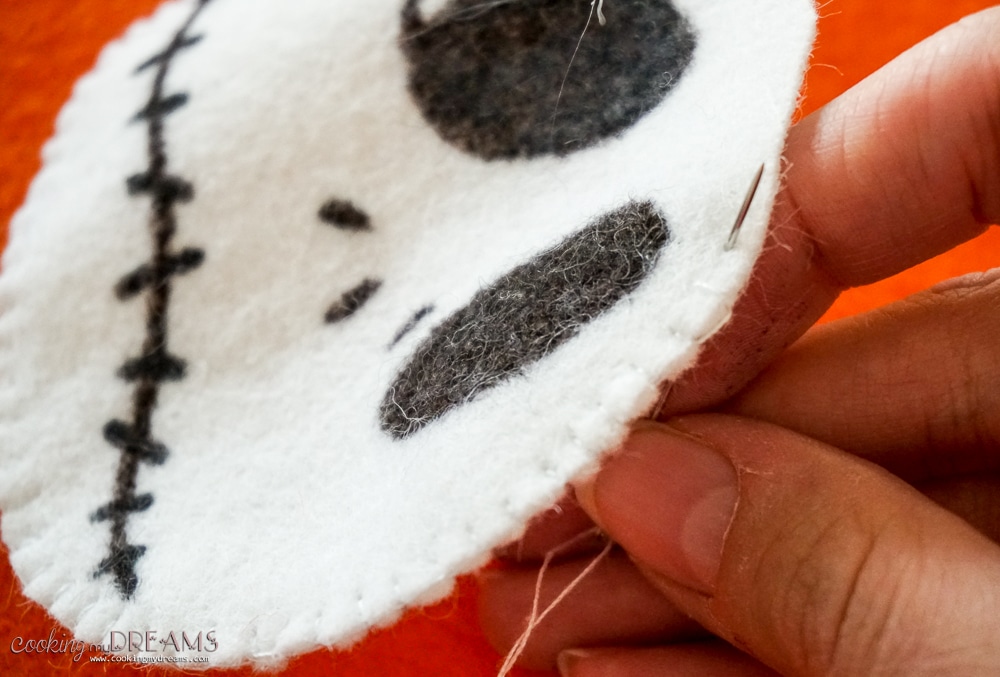 5. Fill with the pillow stuffing, then continue sewing to close the opening.

6. When you have all the shapes ready, you can attach them to the wool yarn, making a knot with the thread on the backside. 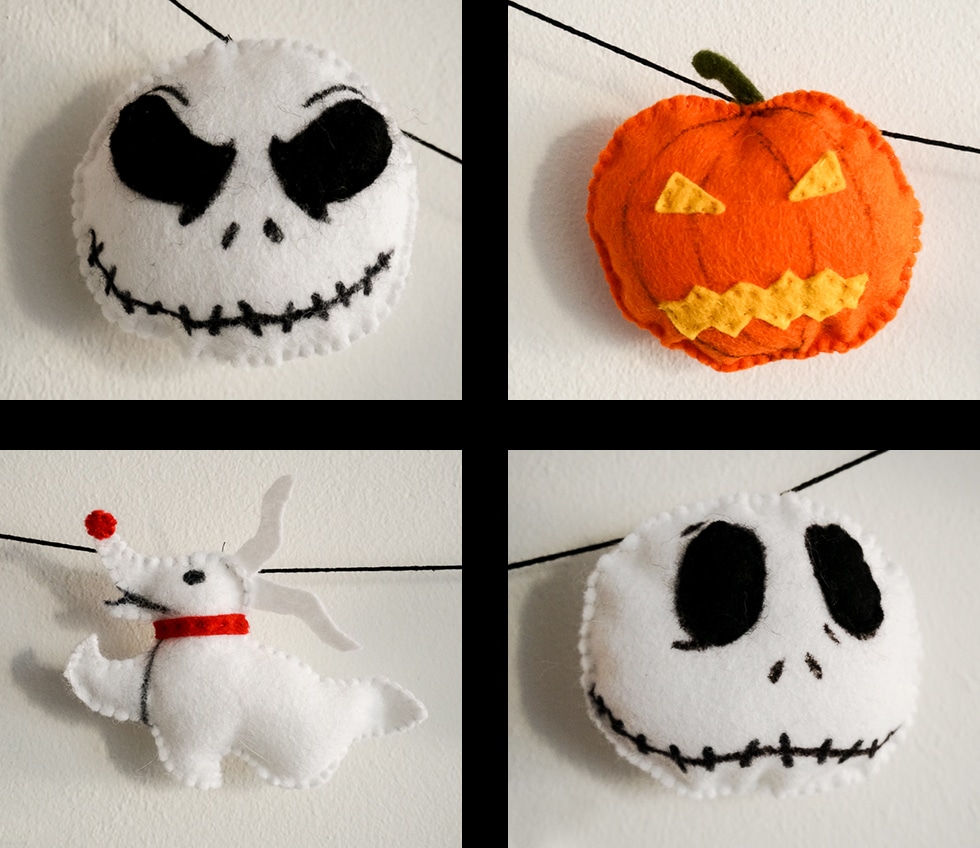 7. Hang the decoration and happy Halloween! 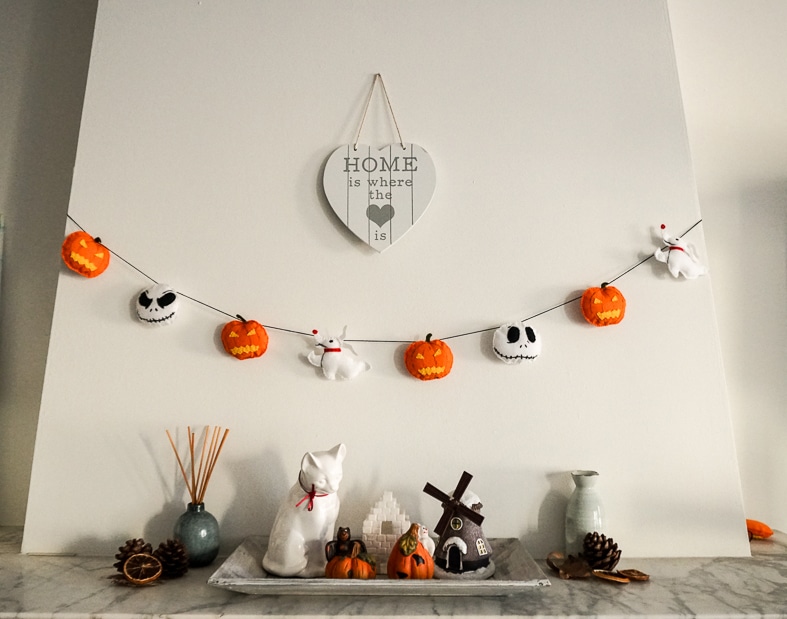 Hi, I'm Jessica! I'm an Italian woman who moved to the Netherlands with a true passion for food, travel, and everything handmade. I love to experiment, learn new skills, and share my knowledge about everything I do!

This website uses cookies to improve your experience while you navigate through the website. Out of these cookies, the cookies that are categorized as necessary are stored on your browser as they are essential for the working of basic functionalities of the website. We also use third-party cookies that help us analyze and understand how you use this website. These cookies will be stored in your browser only with your consent. You also have the option to opt-out of these cookies. But opting out of some of these cookies may have an effect on your browsing experience.
Necessary Always Enabled
Necessary cookies are absolutely essential for the website to function properly. This category only includes cookies that ensures basic functionalities and security features of the website. These cookies do not store any personal information.
Non-necessary
Any cookies that may not be particularly necessary for the website to function and is used specifically to collect user personal data via analytics, ads, other embedded contents are termed as non-necessary cookies. It is mandatory to procure user consent prior to running these cookies on your website.
SAVE & ACCEPT
215 shares