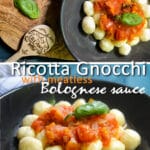 Gnocchi are soft pillows of mashed potatoes mixed with flour. But in modern times there are many different varieties of gnocchi. Substituting or adding to the potatoes other vegetables such as pumpkin, carrot, spinach, etc.

Ricotta Gnocchi are another variety which substitute the potatoes with Ricotta cheese instead of a vegetable. Thanks to the flour and eggs which hold the gnocchi together, you'll have soft and creamy gnocchi. You can serve them with tomato sauces or with the classic butter and sage.

I'm really passionate about gnocchi - just as much as pasta - and I love to experiment new flavors in the shape of round soft pillows. This was my first time trying Ricotta gnocchi (although they're already popular in Italy and abroad). I will serve them with this particular sauce which is a classic sauce in Tuscany.

So let me tell you about this sauce: in Italian it's called "Sugo Scappato". It can be translated into "Runaway sauce". Why "runaway"? Because it's practically a meatless Bolognese sauce (Bolognese sauce is called Ragout/Ragù in the rest of Italy since there are many different varieties). So it's as if the meat ran away from the sauce (Italians like to name traditional food with funny names).

Sugo Scappato is mostly common in Tuscany where it is also known as Sugo Finto (fake ragù). It's origins comes from old times, when peasants could not afford the meat to make the classic ragù.

Since there is no meat in the sauce, I'm keeping the veggies a little bit chunkier to give some texture. But you might as well finely chop them or blend them to get a velvety tomato sauce.

This sauce goes particularly well with these Ricotta gnocchi. You can also serve it with pasta or even spread it on a slice of bread to have yummy Tuscan crostini appetizer.

If you like this recipe, try also these other recipes:

For the meatless Bolognese sauce

Course: Main Course
Cuisine: Italian
Have you tried this recipe?Snap a photo and tag @jess.cookingmydreams or use the hashtag #cookingmydreams!
« "Pici all'Aglione" - Tuscan Pasta with Garlic Tomato sauce
Orange and Squid Risotto »

This website uses cookies to improve your experience while you navigate through the website. Out of these cookies, the cookies that are categorized as necessary are stored on your browser as they are essential for the working of basic functionalities of the website. We also use third-party cookies that help us analyze and understand how you use this website. These cookies will be stored in your browser only with your consent. You also have the option to opt-out of these cookies. But opting out of some of these cookies may have an effect on your browsing experience.
Necessary Always Enabled
Necessary cookies are absolutely essential for the website to function properly. This category only includes cookies that ensures basic functionalities and security features of the website. These cookies do not store any personal information.
Non-necessary
Any cookies that may not be particularly necessary for the website to function and is used specifically to collect user personal data via analytics, ads, other embedded contents are termed as non-necessary cookies. It is mandatory to procure user consent prior to running these cookies on your website.
SAVE & ACCEPT
34 shares