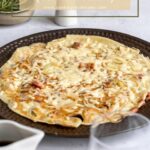 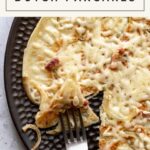 A savory pancake so large that it fills the whole plate. This is one of the most loved food in The Netherlands and with reason: melted cheese, crispy bacon, and sautéed onions make this a fulfilling meal that can be eaten for either breakfast, brunch, lunch, or dinner!

If you've ever been to The Netherlands, you may have noticed some restaurants called Pannenkoekenhuis, literally pancake houses. If you're from the US, you may be familiar with pancake restaurants but it's not really the same.

Pannenkoekenhuis are Dutch pancake restaurants that serve only Dutch pancakes in many different flavors. Compared to the US version, in Holland, they serve mostly savory pancakes. There are only a few sweet versions which include plain with syrup and the traditional apple, cinnamon, and raisins.

The savory variants can include anything, from vegetables to whole dishes. Like the Stamppot Pancake, a pancake topped with mashed potatoes and sausage: 2 classic Dutch meals in 1. But the most common ones are ham and cheese or bacon, cheese and onions. But really, once you have the batter, you can top them with mushrooms, salami, bell peppers, and so on.

A peculiarity of the Dutch is that they like to mix sweet and savory, very much like Americans. Which is very far off my comfort zone as an Italian. So you guess that, when the pancake arrives on the table, Dutch people immediately grab their Schenkstroop (sugar syrup) and generously pour it on top of all the savory goodness.

I have to admit that after 6 years of living in the Netherlands, I still haven't had the courage to pour sugar syrup on top of my bacon, cheese, and onion pancake. Let me know if you try!

You may have heard of Dutch Baby Pancake (which to be honest I've never seen in The Netherlands whatsoever). But Dutch Pancakes, or Pannenkoeken, are something else.

Comparing them to American pancakes, Dutch pancakes have more eggs and are less fluffy because they don't have baking powder. Like French Crêpes. Also, instead of serving several small pancakes in a stack, they serve only a big one that fills the whole plate.

There is also another version of pancakes very common in the Netherlands, called Poffertjes. They're tiny mini puffy pancakes usually served with butter and powdered sugar.

If you want some classic pancakes but with a spin, try my Pear and Chocolate Chip Pancakes.

Sweet pannenkoeken are served with fruits and syrups on top. Instead, the ingredients for the savory ones are most often cooked in the batter (but it really depends on the restaurant preferences), as in this recipe.

If the pancakes are topped with the ingredients, they're usually rolled and then eaten by cutting roll slices. While, if the ingredients are in the batter, they eat it by cutting bites with fork and knife, since it will be thicker, more similar to a Frittata.

If you like this recipe, try also these other breakfast recipes: 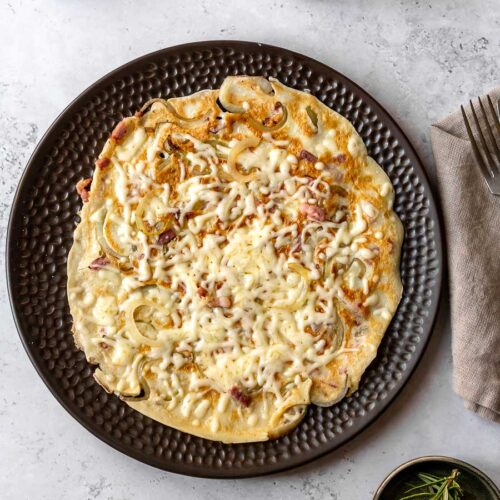 Course: Breakfast, Main Course
Cuisine: Dutch
Have you tried this recipe?Snap a photo and tag @jess.cookingmydreams or use the hashtag #cookingmydreams!
« "Castagnaccio", Tuscan Chestnut cake
Butternut Squash and Sausage Lasagna »

Hi, I'm Jessica! I'm an Italian woman who moved to the Netherlands with a true passion for food, travel, and everything handmade. I love to experiment, learn new skills, and share my knowledge about everything I do!

This website uses cookies to improve your experience while you navigate through the website. Out of these cookies, the cookies that are categorized as necessary are stored on your browser as they are essential for the working of basic functionalities of the website. We also use third-party cookies that help us analyze and understand how you use this website. These cookies will be stored in your browser only with your consent. You also have the option to opt-out of these cookies. But opting out of some of these cookies may have an effect on your browsing experience.
Necessary Always Enabled
Necessary cookies are absolutely essential for the website to function properly. This category only includes cookies that ensures basic functionalities and security features of the website. These cookies do not store any personal information.
Non-necessary
Any cookies that may not be particularly necessary for the website to function and is used specifically to collect user personal data via analytics, ads, other embedded contents are termed as non-necessary cookies. It is mandatory to procure user consent prior to running these cookies on your website.
SAVE & ACCEPT
39 shares