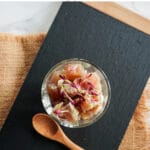 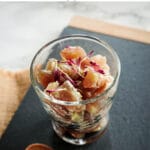 In recent years raw fish has become more and more popular in Europe and America. First, with the advent of sushi in the '70s which slowly became more and more popular, until it completely took over the world food scene really fast in the early 2000s. Nowadays it's even easier to find a sushi restaurant than a Pizzeria. Ok maybe not so much, but still.

In the last couple of years instead I'm seeing more and more on Instagram the Poke bowls: salad bowls with raw tuna or salmon cut into blocks. It seems to be something so exotic and innovative that everybody wants to try it and photograph it.

What is Tuna Tartare?

Many years ago raw fish was unthinkable in our traditional cuisine. Until the asian and exotic food styles opened up our minds and tastebuds to new possibilities. There is a simple dish among all which has been absorbed by the cuisine of France, Italy and so on. You can find in almost every fish restaurant: it's Tuna Tartare.

Tuna tartare was firstly made by chef Shigefumi Tachibe in 1984. He was working in Chaya Brasserie (Los Angeles) when 5 customers asked for a beef tartare. Except one of them didn't eat meat. So the chef quickly put together the tuna tartare as the tuna meat is similar in consistency to the beef.

My tartare is fancied up with lime zest and juice for the marinade and spring onions, that gives it an extra kick.

Many restaurant pair the tuna tartare with many spices and fruits (like peaches or strwberries) for a modern twist, but I appreciate more the semplicity of flavors. This is still my favourite version as it balances perfectly sweetness, saltiness and acidity.

I served this appetizer in various occasions, mostly for holiday meals if we choose a fish menu and I usually serve it in a tiny glass as an amuse-bouche because I prefer a variety of small appetizers rather than a big one. With this recipe you'll be able to make 2 big tartare or 4 small ones.

If you're not sure of how the tuna has been handled/processed, to be safe you should freeze it for at least 15 hours, according to the FDA. Thaw it in the fridge before consuming.

Course: Appetizer
Cuisine: Italian
Have you tried this recipe?Snap a photo and tag @jess.cookingmydreams or use the hashtag #cookingmydreams!

If you like this recipe, you can leave a comment and a star rating to support me. ★★★★★
Thank you so much!

This website uses cookies to improve your experience while you navigate through the website. Out of these cookies, the cookies that are categorized as necessary are stored on your browser as they are essential for the working of basic functionalities of the website. We also use third-party cookies that help us analyze and understand how you use this website. These cookies will be stored in your browser only with your consent. You also have the option to opt-out of these cookies. But opting out of some of these cookies may have an effect on your browsing experience.
Necessary Always Enabled
Necessary cookies are absolutely essential for the website to function properly. This category only includes cookies that ensures basic functionalities and security features of the website. These cookies do not store any personal information.
Non-necessary
Any cookies that may not be particularly necessary for the website to function and is used specifically to collect user personal data via analytics, ads, other embedded contents are termed as non-necessary cookies. It is mandatory to procure user consent prior to running these cookies on your website.
SAVE & ACCEPT
25 shares