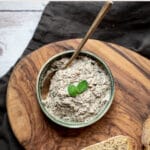 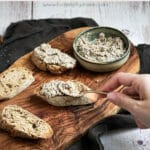 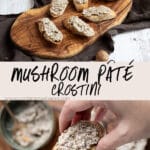 A creamy and flavorful mushroom pate to serve on top of crunchy small slices of bread. This is the perfect Crostini, the one my friends always ask for when we have potlucks or dinner parties. They're so easy to make but they'll surely impress your friends and family! Whatever is the occasion, these Crostini are the perfect appetizer or aperitivo.

A few years ago, with two of my friends, we organized a small Aperitivo party after work. Drinking Prosecco, and watching other the sunset while chatting. For the food, we decided to make a pasta salad, have some chips and I decided to make this mushroom Crostini and a classic tomato Bruschetta.

My friends never tried this mushroom patè crostini and were a bit skeptical. But I made it so many times before that I was sure they would have loved it. And so it was. From that moment on, every time we had a dinner party or Aperitivo, they asked me to make this Mushroom Crostini again.

What's the difference between Crostini and Bruschetta?

I know that it's more common to use the name Bruschetta to call any slice of bread with toppings, but in Italy, there is a big difference between Bruschetta and Crostini.

How to Make Mushroom Pate

The idea for this mushroom pâté actually started when I made my Mushroom and Cream Pasta. While scooping the remaining sauce from the pan with a slice of bread, I immediately thought that the same sauce, if denser, would be great on top of bread as an appetizer.

To make this pâté is very simple. Start by finely chopping the mushrooms either by hand or in a food processor. Sautè them in a pan with olive oil and garlic until they start to brown, then pour a bit of white wine. Wine is great to elevate the flavor of the mushrooms. When the alcohol is evaporated, season with salt and black pepper, and then add a bit of cream. Cook until the liquid is almost absorbed and you have a thick creamy patè.

Let it cool down and then spread on bread slices or serve in a bowl as dip.

Can you Freeze Homemade Mushroom Pate?

Yes, you can freeze this mushroom patè in a container or in a freezer bag for up to 2 months. You can then thaw it overnight in the fridge.

If the patè is already spread on bread slices, you can keep them covered in the fridge for up to 3 days. I do not suggest to freeze the fully assembled Crostini as the bread would become very soggy once thawed.

Can I Make This in Advance?

Yes! The best part of pâtés and crostini is that you can prep everything in advance and then assemble at the last minute.

You can make the patè up to 3 days in advance, then you can store it in an airtight container in the fridge. Take out of the fridge 2-3 hours before you need it, to bring it to room temperature. At the last minute, you can spread it on bread slices and serve.

If you like this recipe, try also these other recipes with mushrooms: 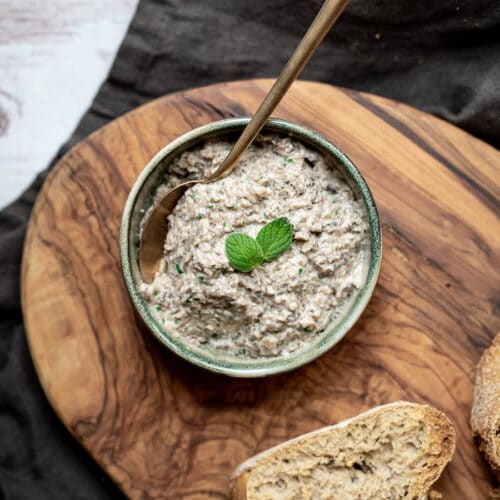 This recipe makes about 10-15 Crostini.

Course: Appetizer
Cuisine: Italian
Have you tried this recipe?Snap a photo and tag @jess.cookingmydreams or use the hashtag #cookingmydreams!
« Pumpkin Risotto with Gorgonzola Cheese
Italian Orange Chocolate Biscotti »

This website uses cookies to improve your experience while you navigate through the website. Out of these cookies, the cookies that are categorized as necessary are stored on your browser as they are essential for the working of basic functionalities of the website. We also use third-party cookies that help us analyze and understand how you use this website. These cookies will be stored in your browser only with your consent. You also have the option to opt-out of these cookies. But opting out of some of these cookies may have an effect on your browsing experience.
Necessary Always Enabled
Necessary cookies are absolutely essential for the website to function properly. This category only includes cookies that ensures basic functionalities and security features of the website. These cookies do not store any personal information.
Non-necessary
Any cookies that may not be particularly necessary for the website to function and is used specifically to collect user personal data via analytics, ads, other embedded contents are termed as non-necessary cookies. It is mandatory to procure user consent prior to running these cookies on your website.
SAVE & ACCEPT
39 shares